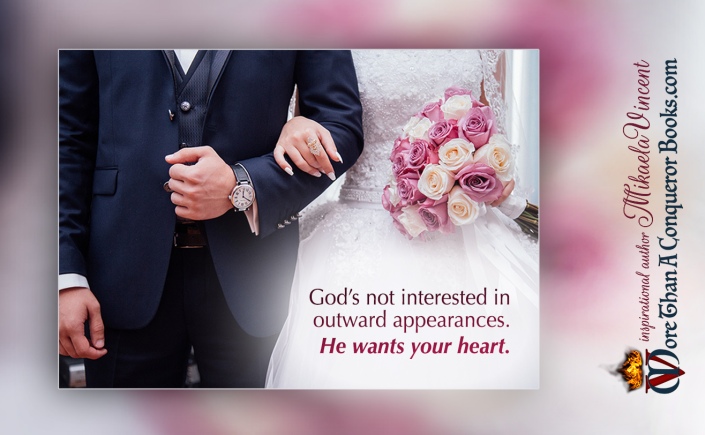 The Lord woke me up from this dream last night, urging me to share it with you today….

A man I know from several decades ago asked me to marry him, even though we hadn’t seen each other in years, and I don’t really know him well. A famous minister and counselor, he traveled extensively to teach on loving God and loving your wife; but ended up cheating on his own wife. Now, he’s rich and famous in more secular circles.

That was the man who in my dream asked me to marry him, but in the wedding ceremony there was no kiss, and afterward, no intimacy. In fact, he just disappeared.

So, the next day, I went looking for him. I found him in a hallway, on the way from one event to another where he was the guest speaker. He seemed surprised, and a little nervous, like he didn’t really expect me to pursue him. And now that I was standing next to him, and we were alone, he appeared embarrassed, awkward. He kept looking up, down, and all around, but not at me. At last, he asked me a deep question, not because he was interested in my answer, but because he thought it was expected of him.

I just wanted him to look at me.

But he never did. Instead, he grabbed my hand, and with his back to me, led me back to the circles where we’d met, and paraded me around. He walked up to everyone in sight, as if he wanted to make sure they all knew I was with him. They smiled politely, and then went on about their business, leaving us alone together once again. He seemed anxious, looking back at those people, like he wanted desperately for them to affirm he was really with me.

Finally, I stood up on my tip toes, put my arms around his neck, and got up in his face. He sort of glanced at me, and then jumped, like he was surprised to find me so close.

Now that I had caught his attention, I asked, “Why did you marry me?”

Apparently annoyed to find me still up in his face, his words shot out fast and blunt, “Because you look good on my arm.”

“That’s not very romantic,” I answered.

“No.” He shifted uncomfortably, and then looked away again. “I married you because I wanted to make sure you’re well taken care of.” An excuse, spoken to placate me.

But I didn’t want his money. I wanted his heart.

So, still up in his face, I said something cute and funny, and he seemed surprised, intrigued, like he had no idea being married to me might actually be fun. He quirked a smile, and I could see the decision click in his mind, like, “Well, since she’s here, why not give it a go?” He turned his back to the people, took my arm in his, and walked off with me into green grass alongside quiet waters.

And then I woke up.

When I asked the Lord what the dream meant, I felt Him saying:

“Don’t make Me your trophy bride. I’m not a choice you make to help you look like a good person, so you can further your influence and career. You may think all is well because you support Me financially, but that, also, you do only to make yourself look good. I am the Lord God Almighty, Who created you for divine purposes, the greatest of which is deep, intimate relationship with Me. I’m not interested in appearances or money. I want your heart. Glance My way, even for a moment, and I will surprise you with just how intriguing, fulfilling, peaceful, and exciting betrothal to Me truly is.”

For deep Bible study workbooks, prayer journals, and other helps to listen to God and remove the barriers to oneness with Him, visit Give a Book, Change a Life or my author website at MoreThanAConquerorBooks.com.

May My Life Be a Love Song to You God day planner, diary, prayer journal for worshippers

Delight to Be a Woman of Wonder

Delight to Be a Woman of Wonder Prayer Journal

Delight to Be a Woman of Wonder Power Planner

Dare to Be a Mighty Warrior

Dare to Be a Mighty Warrior Prayer Journal

Dare to Be a Man of God

Dare to Be a Man of God Prayer Journal

Delight to be a Woman of God

Delight to be a Woman of God Prayer Journal

Dare to Become a Man of God

Delight to Become a Woman of God

Dare to Become a Kingdom Culture Leader, Volume One: One Passion, One Purpose, One King

Rescue from Darkness (Book 1: Chronicles of the Kingdom of Light)

Sands of Surrender (Book 2, Chronicles of the Kingdom of Light)

Out You Go, Fear!

I Want a Horse!

I want to see Jesus!

(Mikaela Vincent is a participant in the Amazon Services LLC Associates Program, an affiliate advertising program designed to provide a means for sites to earn advertising fees by advertising and linking to amazon.com. In other words, when you click on the links to that company and make certain purchases, even if you don’t buy one of my books, I receive a small commission at no additional cost to you for advertising for that company on my page. Any proceeds received by the Mikaela Vincent go to bringing the light  to dark corners of the world.)